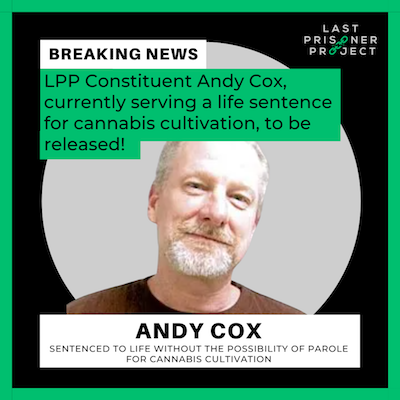 In 2005, Andy Cox was indicted for conspiracy to manufacture marijuana for growing cannabis plants in the forest on his father’s property. A former firefighter, small business owner, and father of three, Andy wanted to grow his own cannabis to consume and sell — the same thing cannabis industry leaders are now minting millions of dollars doing without prosecution.

Despite the absence of violence of any kind, Andy was sentenced to LIFE without the possibility of parole. Tragically, during the 12 years he was incarcerated, Cox lost his father, youngest son, and many other friends and loved ones.

In 2020, pro bono attorneys at Goodwin filed a motion for re-sentencing through LPP’s federal compassionate release program. Earlier this week, that order was granted and mercifully, Andy was released.

When we spoke with Andy, he expressed his immense gratitude for these efforts, which have allowed him to reunite with the family he’s been separated from for over a decade. We’d like to express our deep appreciation for all of the LPP supporters and partners who, through your generous contributions of time, energy and financial resources, enable us to continue the fight for freedom for cannabis POWs like Andy. It’s because of you that so many are getting a second chance at life.

We are thrilled Andy was finally able to get the justice he was so long denied. And we look forward to working to make release a reality for countless other cannabis prisoners in the coming year.